Don Anderson Will Be Awarded the 1998 Crafoord Prize

PASADENA—The Royal Swedish Academy of Sciences is to award the 1998 Crafoord Prize in geosciences, with special emphasis upon "the dynamics of the deeper parts of the Earth," to Don L. Anderson of the California Institute of Technology and to Adam M. Dziewonski from Harvard University for their fundamental contributions to our knowledge of the structures and processes in Earth's interior. The 1998 Crafoord Prize is valued at $500,000 dollars, and will be presented to the prizewinners at a ceremony on September 16 in Sweden.

On hearing the news that he had been awarded the 1998 Crafoord Prize, Caltech's Eleanor and John R. McMillan Professor of Geophysics Don Anderson said, "I think it's very significant that deep-Earth geophysics is being honored by this award. It is rare for our field to be acknowledged in this way. I am really delighted that Adam Dziewonski, a close colleague of mine, is also being honored for his work. Most people, when they think of geophysics, think of earthquakes, but seismologists do other things, such as x-raying Earth using seismic tomography to see what is going on in the deep Earth."

Caltech president David Baltimore congratulated Professor Anderson and noted that "the Institute is very proud and pleased that Don will be receiving the Crafoord. It is exciting news. Don's work is truly deserving of this great prize. He is one of the world's most prominent scientists in the area."

According to the Royal Academy, Anderson and Dziewonski have together developed a generally accepted standard model of how Earth is organized and of the dynamics of the processes at its core and in its mantle that govern continental drift, volcanism, and earthquakes.

Anderson and his team have researched changes arising from the pressure deep down in Earth's mantle. Sudden changes in the rock types at depths of 400 kilometers and 660 kilometers are explained by conversions undergone by the rock types, so that they contain minerals entirely unknown at Earth's surface. At 400 kilometers, the mineral olivine, common in lava, changes to spinel, a high-pressure mineral. At 660 kilometers, the mineral perovskite is formed, a mineral otherwise only produced in the laboratory at very high pressures and temperatures. Anderson's research has shown that such changes in composition of the mantle may explain the occurrence of tensions in Earth's crust that can lead to earthquakes. Anderson and his research team have also used seismic data to study convection currents in the mantle, important for understanding continental drift and volcanism. Recently, Anderson has also used geochemical and chemical-isotope methods not only for mapping Earth's development, but also for understanding the development of the moon and the planets Mars and Venus.

Anderson was born in 1933 in Maryland and received his doctorate in geophysics from Caltech in 1962. He has been a leading figure in "deep Earth" research since the 1960s. He was director of the Seismological Laboratory at Caltech from 1967 to 1989. In 1989 he published his "Theory of the Earth," a remarkable synthesis of his broad and provocative research and a guide for geo-researchers from different fields for future exploration of the dynamics of the deep parts of Earth.

The Crafoord Prize is awarded at a ceremony held on September 16, Crafoord Day. On this occasion, the prizewinner gives a public lecture and the Royal Academy organizes an international scientific symposium on a subject from the chosen discipline of the year.

The Anna-Greta and Holger Crafoord's Fund was established in 1980 to promote basic research in mathematics, astronomy, the biosciences (particularly ecology), the geosciences, and polyarthritis. Both an international prize and research grants to Swedish scientists are awarded among the scientific fields mentioned above. 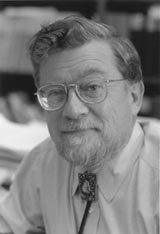