PASADENA--Eli Broad, one of Southern California's most prominent civic and business leaders, has teamed with the California Institute of Technology to create a center for the biological sciences which will drive technological and scientific innovation and solidify Southern California's role as a leader in the biotechnology industry.

Broad has donated $18 million to create the Broad Center for the Biological Sciences, which will provide 100,000 square feet of space for 10 new Caltech research groups to work at the cutting edge of the biological sciences. The contribution is part of a $100 million campaign by Caltech to increase its historical strength in the biological sciences. The gift was announced on Tuesday, September 15 at a press conference held at Caltech's Athenaeum.

"Advances in the biological sciences will have the single greatest impact on human experience in the coming century," said Broad. "I want Southern California to be a leader in this critically important field, and Caltech is uniquely qualified to spearhead this remarkable new initiative."

Broad's gift is the largest donation so far in Caltech's new Biological Sciences Initiative, which aims at raising $100 million for new faculty and resources. A total of $56 million has been raised since the initiative was announced in May of this year.

The Initiative comes at a time when the scientific community is clearly directing greater resources to fundamental discovery in the biological sciences. With many new and promising biological and medical advances on the horizon, Caltech officials feel that augmenting the resources available to biological research will have a direct impact on high-tech ventures in the Los Angeles/Pasadena area as well as breakthroughs in the health field.

"Eli's gift will insure that Caltech remains at the biological forefront as we enter the new century," said David Baltimore, president of Caltech and a Nobel Prize-winning biologist.

"I see great strides ahead in the manipulation of genes in myriad areas from medicine to information technology to agriculture," Baltimore added. "We are entering the post-genomic age."

The new building will be located in the northwest quadrant of campus near the Beckman Institute. As the cornerstone capital project of the Biological Sciences Initiative, the building will provide crucial infrastructure in the Institute's new capabilities for magnetic imaging, structural chemistry, and mammalian genetics.

"The biological sciences are being touted as the economic engine of the 21st century," said Mel Simon, chair of the Caltech Division of Biology. "This gift is going to lead to significant contributions toward our country's economic well-being as well as our physical well-being."

In addition to the new building, the initiative also sets as its goal the hiring of a dozen new professors, the creation of new disciplines and new approaches within existing disciplines, the support of new graduate fellowships and postdoctoral positions, and the creation of new MD/PhD programs. The Biological Sciences Initiative is being co-chaired by Caltech trustees Camilla Chandler Frost and Benjamin M. Rosen. 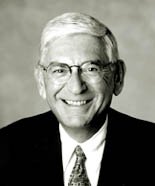